(English) Up and Away- and the Art of Safe Return

Click here to read this article in Manufacturing in Focus

Just 12 seconds long, the Wright brothers’ manned flight near Kitty Hawk, North Carolina, changed the world forever. Traveling 120 feet at 6.8 miles per hour, the Wright Flyer made what is considered humanity’s first real flight. It was the start of a revolutionary industry: aviation.

Built by Orville and Wilbur Wright, the heavier-than-air biplane made four flights on December 17, 1903, the last almost a minute long and spanning 852 feet (about 260 meters).

For the brothers — neither of whom graduated high school, but who designed and manufactured bicycles and had an unwavering interest in everything mechanical — and the world, that cold December day ushered in an entirely new mode of transportation.

In 1919, 16 years after the historic Wright Brothers flight, innovator Leslie Irvin both made the world’s first free-fall parachute descent, and formed the company that was to become Airborne Systems, the Irvin Air Chute Company in Buffalo, New York. It was, as we show, a company dedicated to airborne safety and innovation.

The business quickly became an industry pioneer. The company produced the X-type Paratroop Parachute Assembly in 1940, used during the Second World War and for decades after. In 1951, the company joined forces with Martin-Baker to create the first autonomous pilot-seat ejection system, saving countless lives.

Other firsts followed, including the development of the recovery system for Discoverer 13, the first object to be recovered from orbit; landing drag parachutes for the Space Shuttle Endeavor; the creation of the state-of-the-art Intruder system for the U.S. Army, and key innovations of systems for Boeing’s CST-100 and NASA’s Orion, and other programs.

Celebrating its 100th anniversary in 2019, the pioneering company founded by Leslie Irvin is today known as Airborne Systems. With locations in Pennsauken, New Jersey, Santa Ana, California, and a training facility in Eloy, Arizona, Airborne Systems designs, engineers, and manufactures leading products for military and aerospace customers to this day.

Never compromising on materials or quality, the company is known for best-in-class parachutes, delivery parachutes, GPS-guided cargo delivery systems, revolutionary deceleration products for space and air, and other unique technologies.

“We’re pretty much the biggest parachute manufacturer around, especially when it comes to recovery and specialized applications,” says Charles W. Lowry. Graduating as a mechanical engineer from Cal Poly Polmona, Lowry started with Airborne Systems in 2012 as an intern, became full-time two years later, and is today Project Engineering Supervisor.

He is one of about 500 highly qualified staffers among the company’s three facilities, which includes disciplines such as aerospace engineers, mechanical engineers, analysts and departments responsible for manufacturing engineering and production engineering.

For over a century, Airborne Systems has spearheaded the creation of unique products marrying safety with function. Serving American and allied military clients, the company counts aerospace, special operations, global humanitarian groups, and various levels of government among its clients. Although the sectors may differ, Airborne’s commitment to best-in-class quality products and dedication to safety remains the same.

In business for more than a century, Airborne Systems has proven itself to customers worldwide time and again. And the main reason that well-known entities like NASA, the U.S. Army and others keep coming back to Airborne goes far beyond just manufacturing capabilities.

Aerospace giants count on Airborne for the extensive knowledge and experience gained over 100 years of creating products that are scrupulously designed but innovative, exhaustively tested, and made from the most reliable materials in existence.

“Most companies do not design their own parachutes. They want the best,” comments Lowry. “We need to be involved at some level, and most companies need outside expertise and outside manufacturing and support.”

Receiving specifications from clients, the company builds parachute systems around those requirements; in some cases, they are based on past space programs going all the way back to Gemini and Apollo missions.

Airborne rigorously tests massive, multi-million-dollar parachute systems 50 or 100 times if necessary. “Some big test programs go into the space systems, especially ones that are going to be human-rated,” says Lowry. “Nobody takes the lives of astronauts lightly, and there are all sorts of tests we do to make sure the parachutes are going to work every time.”

When Leslie Irvin formed the company bearing his name, he developed parachute systems for biplanes, balloons, and other slow aircraft of the time. Today, hypersonic planetary entry sees remarkable speeds of Mach 10 or even Mach 12 (some 9,200 mph; to put it into perspective, breaking the sound barrier requires reaching Mach 1, or a velocity of some 770 mph).

Parachutes are rarely used above Mach 3 (2,300 mph), so for the likes of NASA, Airborne has developed other aerodynamic decelerators, such as Hypersonic Inflatable Aerodynamic Decelerators – HIAD for short. These are used to decelerate payloads and objects going faster than Mach 3 or Mach 5.

“When we say ‘space and recovery,’ we don’t want to say we’re just a parachute company, which doesn’t tell the whole story,” comments Lowry. “We specialize in aerodynamic decelerators, whether that’s subsonic troop parachutes, or hypersonic space re-entry decelerators.”

Airborne’s expertise will play a vital role, greatly decelerating the Mars 2020 when “the spacecraft hits the Red Planet’s atmosphere like a 11,900 mph (19,000 kph) freight train on Feb. 18, 2021,” according to NASA’s website. Replacing the Curiosity Rover which has explored Mars since 2012, the Mars 2020 spacecraft will be slowed down to about 200 mph thanks in part to a crucial role that the parachute system created by Airborne plays.

First off, however, the spacecraft’s heat shield will play its assigned key role in the demanding EDL (entry, descent, and landing) phase – reaching an external temperature of approximately 2,370 degrees Fahrenheit (1,300 degrees Celsius) as it slows the spacecraft to less than 1,000 mph (1,600 kph).

It’s at this point that a supersonic parachute measuring 70.5 feet (21.5 meters) in diameter deploys at about seven miles (11 km) out.

From there, a series of carefully calculated events takes place. The heat shield separates from the craft and falls away, the parachute slows the Mars 2020 to 200 mph (320 kph), and is then cut free, and the spacecraft further slows itself through retro-propulsion rockets. The landing is challenging, particularly since Mars’s atmospheric density is low, just two percent of that on Earth.

“For a parachute to work, you need some sort of atmosphere, you need air,” says Lowry, “so there’s a lot of special challenges that come with that. How to get the Rover onto the surface of Mars is quite complex, because of the atmosphere. The parachute is a major part of it, slowing it down to, say, 80 percent of what it needs to be slowed down to, [before the retro-propulsion rockets kick in]. If it was just the parachute, the Rover would still hit the ground at 200 mph.”

Known worldwide for its innovative parachute design and manufacturing, Airborne Systems is proud to count the U.S. Army and other friendly countries’ military establishments among its clients.

Matt Zwicker, Senior Research and Development Engineer, has been at Airborne’s New Jersey facility for the past half-decade, although he’s been with the company for the past nine years – spending the first four at the space and recovery division in California. He focuses on parachute certification, testing, and product design.

When Airborne modifies existing products or introduces new ones, Zwicker’s department builds components for testing, and runs test sessions, air drops and live jumps to ensure that safety, and performance and reliability are up to its exacting standards.

Prior to use, Airborne parachutes must not only pass extensive testing, but also meet demanding certifications.

Earlier this year, the company’s Intruder® 210R parachute received Federal Aviation Administration (FAA) TSO-C23(f) certification. Representing the most recent and stringent certification standard from the FAA, the Intruder 210R is compatible with Instructor parachutes from 170 to 230, and meant to use with Airborne’s iRaider harness system.

For the company, the FAA certification represents another bold step forward, and the culmination of hundreds of hours of research, design modifications, and test jumps. Going back around 2015 and completed in 2018, the Intruder 210R represents the exhaustive testing program performed by Airborne Systems to ensure the highest levels of safety, reliability, and performance – an activity complemented by the years of research and experience in producing countless other fine products.

What makes the Intruder 201R unique is that it’s a parachute for military instructors.

Traditionally, military instructors were using sport skydiving equipment purchased from other skydiving manufacturers. Since these systems were not truly indented for military environments or users, this resulted in higher potential for injury.”

“The military came to industry, and said they wanted instructor parachutes that were an alternative to the ones they were currently using,” states Zwicker, “so we needed a reserve parachute that could meet FAA certification for that purpose, because you have to deploy it at lower altitude.”

Since existing parachutes were certified to older FAA certifications, this presented challenges, especially with total velocity of the parachute after deployment is complete.

“The easiest way to make a parachute move slower is to make it bigger,” comments Zwicker. “But if you make a parachute much larger, and still inflate it quickly, the load on the jumper becomes high enough to risk injury.”

Calling it an “over-constrained problem that couldn’t be met easily,” Zwicker and his team took the Intruder parachute – what the US Army calls RA1 – and modified the parachute design, including the airfoil section, the way the wingtips are constructed, and how the brakes were configured, to find a compromise that met both total speed limit and the altitude loss requirement, while also able to carry enough weight to meet military-instructor specs.

“That’s why the TSO-C23(f) certification was such a big deal for us, because there’s not a lot of ways to solve a problem, and we managed to find one,” says Zwicker. “The previous revision of that standard – C 23E – nobody ever met it, so no parachutes were certified to it and the FAA eventually canceled it.”

With so many internal capabilities, Airborne Systems’ expertise sees the company working with military and space agencies in friendly countries worldwide. Says Lowry, “What we do at Airborne Systems is not just provide off-the-shelf parachute systems: it’s more of a service where we solve very complex problems that most of our competitors can’t.” 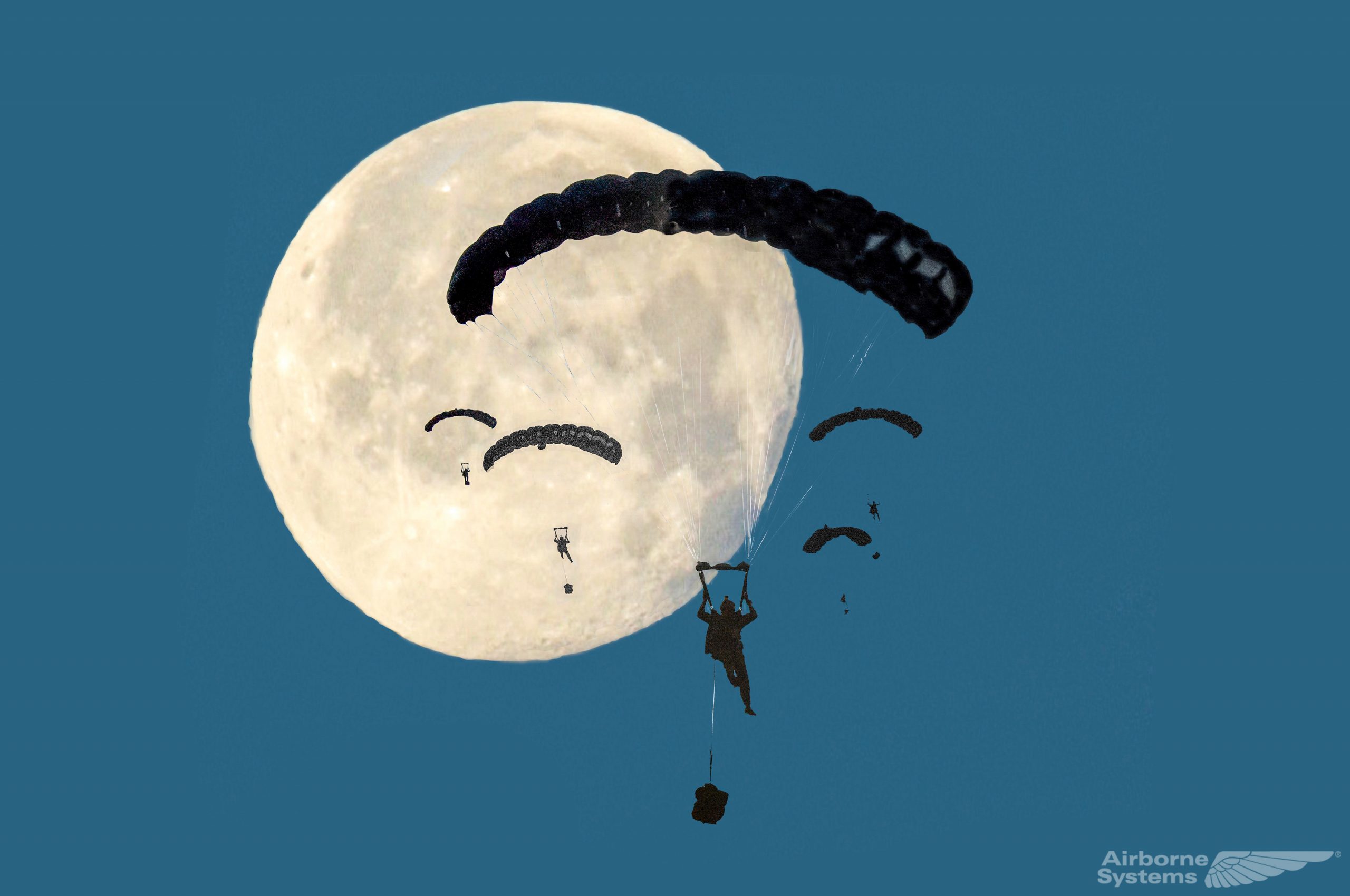